The best chefs don’t merely cook food—they serve memories. Because once you have eaten, what lives on is the memory. And while you may not remember every specific detail of the meal, you will always treasure the satisfaction you felt at the end. What makes these chefs cooking unique is the care they put into the plate they serve – whether it is the colour, texture, smell, or taste.

And then there are those chefs who change the cooking paradigm by changing the way diners expect their meal. They are committed to using only the freshest local produce and always leave you experiencing something new and exciting. They are trendsetting, inspirational chefs who have the best restaurants in the world. Read on to find out about the best restaurants in the world. 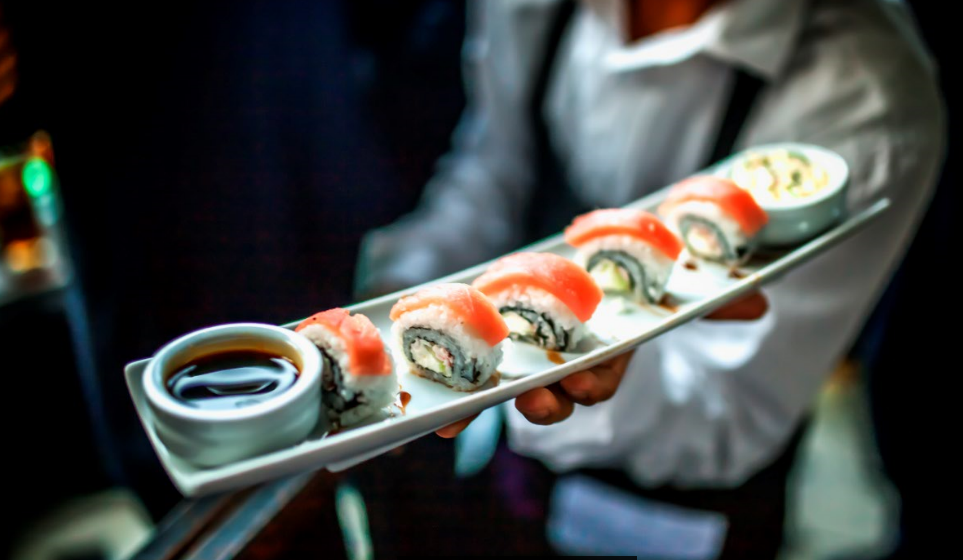 Maido means ‘welcome’ in Japanese and is the flagship restaurant of chef Mitsuharu Micha Tsumara, who serves a wide range of inventive dishes. The menu at this restaurant includes Peruvian-Japanese bites alongside à la carte options and a classic sushi counter. It’s a favourite setting for business dinners and diners who come here to celebrate special occasions as well as a chance to sample some of the best offerings in the city.

About the chef – Tsumara, the head chef at Maido is a native of Lima, who was encouraged by his father to turn his passion for cooking into a full-fledged profession. After studying culinary arts in the US, he went to Japan to learn about his culinary and cultural heritage. Although he spent months washing dishes, he learned vital cooking and knife skills during his time here – which also played a significant role in helping him learn making sushi. 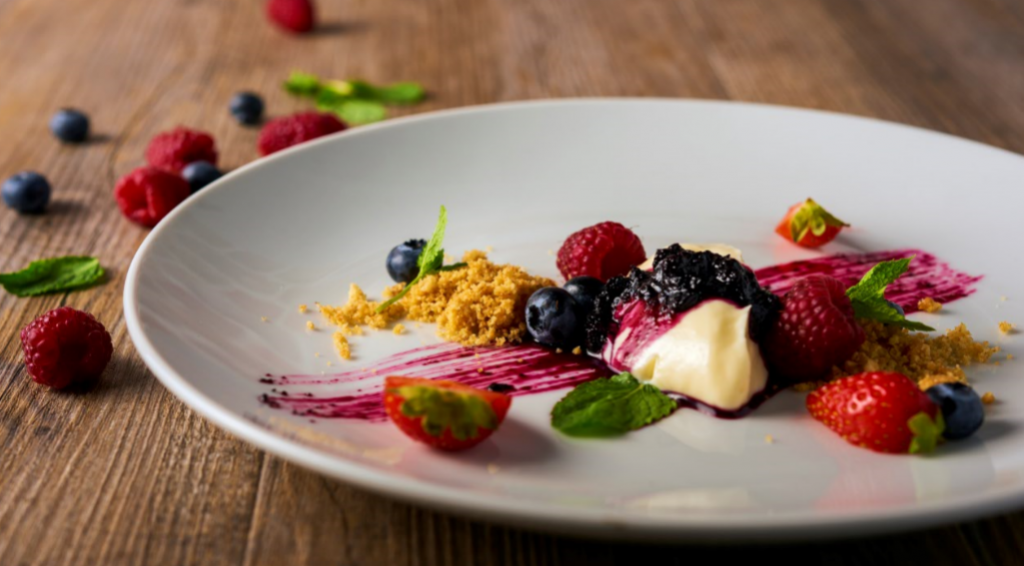 Gazpacho in sandwich form? Crispy egg yolk? Liquid salad? Hare bonbon? If these paradoxical dishes have you intrigued, then Disfrutar is just the place for you. A unique restaurant in Barcelona, there is a range of surprises awaiting diners who come here to enjoy a meal.

Disfrutar serves an Avant-Garde menu that can run to over 30 courses, which is in sharp contrast to the simple dining room and opens onto an outdoor terrace.

About the chef – The restaurant is co-owned by three chefs, namely Oriol Castro, Mateu Casañas and Eduard Xatruch. All of them held a senior position in the creative culinary team at the legendary El Bulli before the restaurant closure in 2011. The trio opened the casual Compartir in Cadaqués on the Costa Brava in 2014, after which they added Disfrutar to the mix in late 2014. 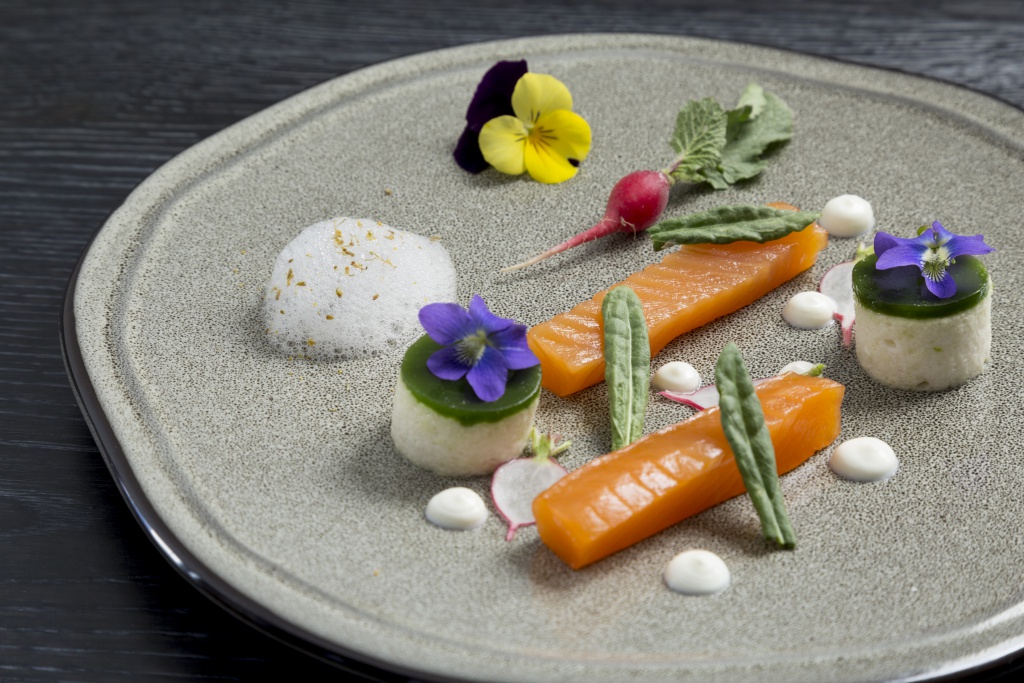 The Arpege restaurant in Paris is a real delight for vegetarians as here vegetables take centre stage. Although it was a reputable meat institution until 2001, it has since then turned vegetarian. Owned by Alain Passard, vegetables served at this restaurant come from Passard’s farm.

A three-star Michelin for more than two decades, Arpege owns much of its success to Alain Passard. One of the few cooks, he has managed to remain on top of the global fine dining scenes for decades. In 2019, he was the recipient of the Chef’s Choice Award as well.

Despite his ever-evolving menu, Passard has managed to create a range of favourite dishes, some of which are so famous that food connoisseurs book their meals months in advance. Some signature dishes include white asparagus {in spring}, black truffle {in autumn}, dumplings stuffed with seasonal vegetables and langoustine carpaccio with caviar. Trust us a meal here, and even the carnivore in you will not complain about the lack of meat here. 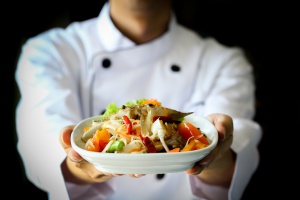 Playful, Avant Garde and highly innovative – Mugaritz in Spain is a creative dining experience crafted by Chef Andoni Luis Aduriz. The chef readily admits that not all his dishes are designed to be enjoyed by diners and require a unique sense of sensibility. Dishes on the menu change every six months and bear some unique names like How Long a Kiss Lasts or Depends On How I Look At It.

Mugaritz is not for the faint-hearted but those open to experimentation. Inspired by the rich and complex tapestry of Basque ingredients, the restaurant has several unique experiences, waiting to be savoured. Crabs served on a frozen tongue, raw pork heart or bellota ham plated on musical dishware that’s perfectly timed, so all diners eat and orchestrate together. Interesting right?

Also, Andoni holds a lottery every April before the Mugaritz season starts to invite ten diners to behind the latest menu scenes. Talk about being lucky! 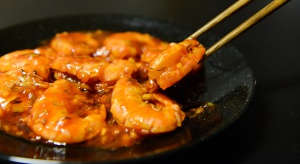 In its 17 course meals, centrally located in Peru explores every altitude – from 20 meters below the sea level to 4,100 meters above it. Owned by Martinez and Leon, Central is a faithful rendition of the diverse landscape of the country. Some classics include Land of Corn and Extreme Stems and more new dishes like Water of Nanay which features piranha fish served in an entire, sharp-toothed filled piranha head.

Today, Central has expanded its boundaries to include Miraflores district as well. Additionally, Leon has also opened her first solo restaurant called Kjolle in the same place as well – with an expanding base; this brand is set to captivate the culinary world in the coming years.

Operated by Rasmus Kofeed and his partner Søren Ledet, the restaurant effectively showcases a unique collaboration between nature and technology. Boasting of 17 plus artistic courses composed of organic and wild Scandinavian ingredients, this restaurant has been receiving rave reviews since its opening in 2007.

With an impressive menu, Rasmus Kofoed is the first chef in Denmark to have earned three Michelin stars. One of the only chef to have ever won the gold, silver and bronze medals at the esteemed global cooking competition the Bocuse d’Or, his meticulous approach to seasonal Danish cuisine has seen Geranium truly excite food connoisseurs around the world. If that does not make you want to go here, we don’t know what will! 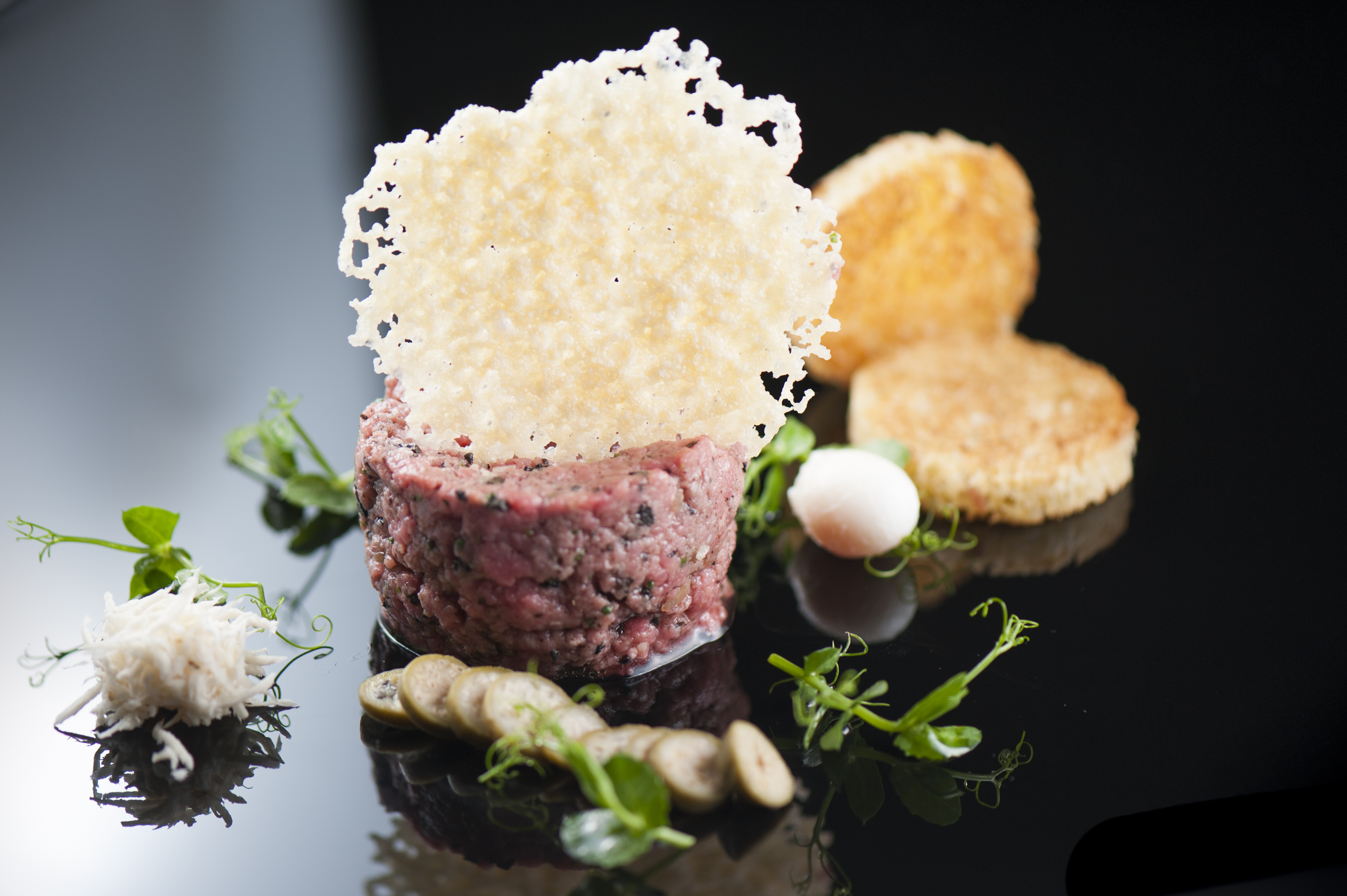 For four years, Gaggan has been voted as the topmost restaurant in Asia, a testament to the constant level of innovation and improvement that takes place here, without making dining a dull and tedious affair. Serving up a menu of more than 25 courses of rapid-fire small bites, this restaurant is one of Bangkok’s star culinary attraction.

Over the years, Anand’s menu has evolved from purely modern Indian to a much more comprehensive and global cuisine. With inspirations from Gaggan’s travel to places worldwide, the menu now includes dishes like the Mexican-inspired taco bites, Japanese Indian nigiri sushi, and even aubergine Oreo biscuits. The classic Yoghurt explosion remains a diner favorite along with newer additions like Lick It Up, where people are encouraged to lick a flavorsome curry straight from the plate. Trust us, a culinary experience like this is not to be found anywhere else in the world.
A good time to visit Bangkok would be during the upcoming Diwali or Independence Day weekend where tickets would cost anywhere between INR 15,000 – 18,000. Make sure you check out some incredible deals from digibank which also offers your personal loans for travel of up to INR 15 lakhs, perfect for if you want to knock out a few more places from this list. 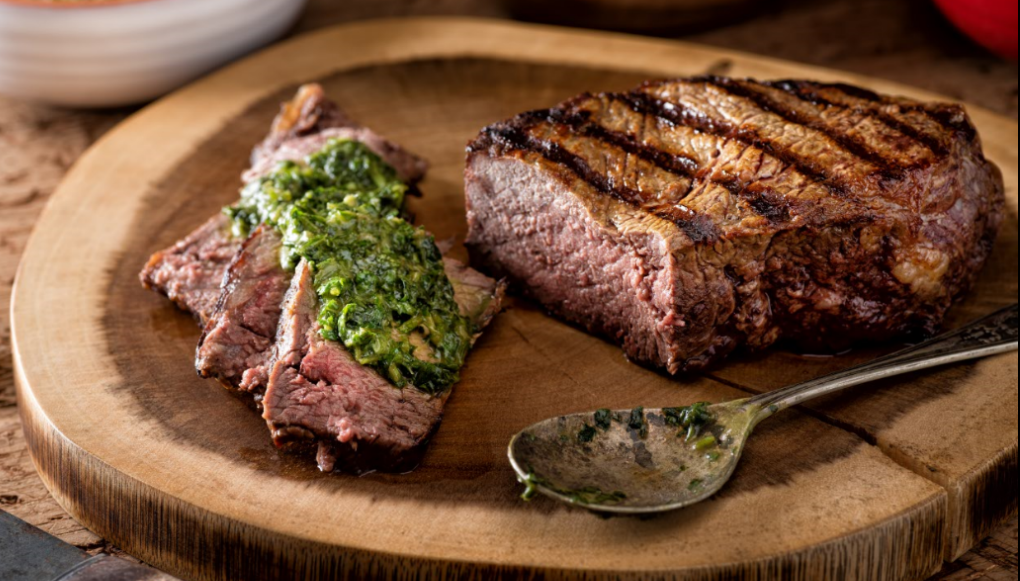 Simplicity is at the forefront of this restaurant owned by Chef Victor Arguinzoiniz, who has a remarkable ability to bring out explosive flavor from simple ingredients. Most of the dishes served here are grilled over an open hearth, which adds to the said ingredient’s natural taste and aroma. So, whether it is goat milk churned into ethereal butter or green peas amplified in their juice or beef that is dry-aged for so many days, it bites with unami – there is something memorable associated with each dish.

About the chef: Arguinzoniz was born and raised in the farming community of Axpe – a small and scenic village nestled in the mountains. A self-taught chef, he only worked in his kitchen where he designed and built his famous adjustable-heat grills.

The chef’s upbringing is genuinely reflected in his restaurant’s interior as well – which in comparison to other world-class restaurants is truly simple and unpretentious. The effortless and relaxed, but flawlessly charming, style of service is a perfect fit for the setting. Etxebarri’s ground floor houses a basic bar that also doubles as the village pub. 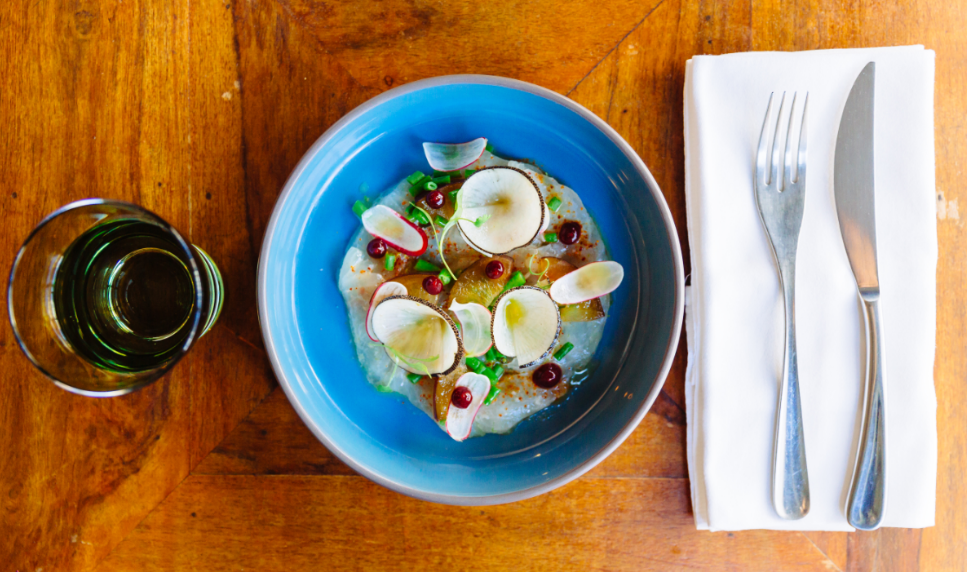 Based on the New Nordic style of cooking, Chef Rene Redzepi is redefining culinary arts. By looking back into history and digging deeper to explore unsung foraged products, this brand of food is now being celebrated by Redzepi who celebrates terroir via ingredient-focused minimalist plates.

Redzepi closed the original Noma in February 2017. He then moved his restaurant to a more spacious plot on Refshalevej Island with its first service taking place in 2018. When Noma was relaunched, Chef Redzepi introduced a brand-new dining structure in which the restaurant serves roughly 20 courses in a meal, with menus that are changed three times a year, depending on seasonal ingredients. The Seafood season starts in January and ends in June, while the vegetable seasons starts in June and runs through September. The third season namely the Game and Forest Season begins in September and ends in December.

The diner is advised to make a booking in whichever period suits their palate. But one thing remains constant through all the menu – the ideology that made Noma’s name stays true: native ingredients explored through the lens of myriad cooking techniques that join to become far more than the sum of their constituent parts. 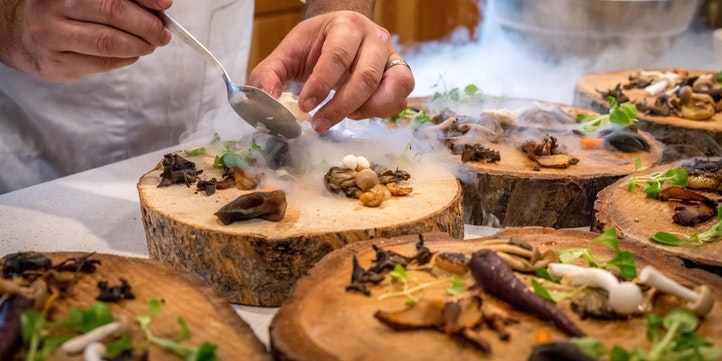 Three levels of cascading vegetable gardens churning out the sweetest produce, iconic views of the French Riviera, and a team of outrageously talented cooks and front-of-house staff make Mirazur a dream restaurant for foodies and diners around the world. Mauro Colagreco’s unique cuisine is inspired by the sea, the mountains, and the restaurant’s gardens, including Menton’s emblematic citrus fruits.

The tasting menu at Mirazur includes salt-crusted beetroot from the garden with caviar cream, eggs with smoked eel and hazelnuts, a brioche of potatoes with melting egg and white truffle. The restaurant’s perfect-for-sharing bread is infused with ginger and served with a Pablo Neruda poem. Literary perfection is indeed possible!

These best restaurants in the world truly deserve to be on the list of every foodie. Have you planned your foodie getaway yet?