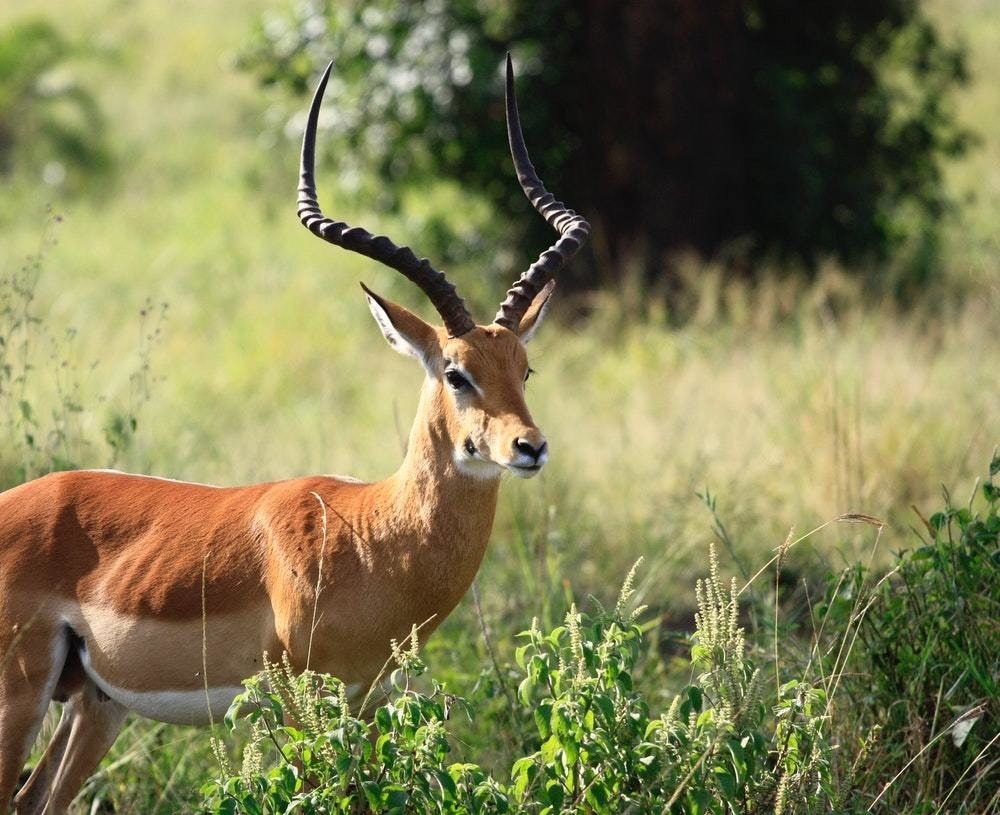 Skip The Beach: 6 National Parks That Deserve Your Attention

India is known for a wide variety of flora and fauna. Besides boasting of a diversity that is both unique and special, it supports a diverse range of wildlife, which means that there is something here for every type of nature lover.

From numerous species of gibbons to lions and from golden eagles to whales, almost every part of the country has a wildlife park or sanctuary that merits a visit from travellers around the world. So, next time you want to head out and watch some incredible wildlife in their natural habitat, make sure you make your way to the national parks mentioned below. 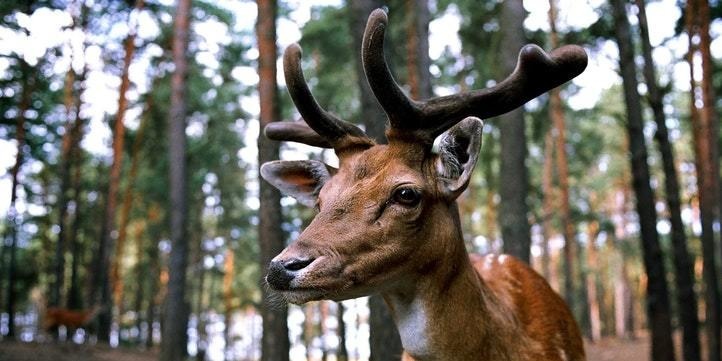 From ancient times, blackbucks have always fascinated Indian rulers. This graceful antelope has survived mainly due to reserves like Tal Chhapar which is today a wildlife sanctuary that works towards preserving this species. Located in the Churu district of Rajasthan, the Tal Chappar is only eight square kilometres in area.

Although it only has a limited area, it guarantees sightings of this animal, especially in the post-monsoon season, when the animal population increases significantly. There are no safaris and visitors can stroll through the park on foot or drive through in their vehicles. The park is open throughout the year.

Besides the blackbuck, the park is also home to other animals like the desert fox, Indian desert jird, desert cat, and the chinkara. If you are avid birdwatcher, head here to witness a wide variety of birds. These include the laggar falcon, greater spotted eagle, and red-headed vulture, to legions of beautiful demoiselle cranes, that come here to escape the cold climate of the Himalayas.

How to reach – The nearest railway station is Chappar which lies on Degana-Churu-Rewari line of the North-Western Railways. The nearest airport is Jaipur which is 215 km from Chappar.

Best time to visit – November to February {You book tickets to Delhi, post which you can book a Zoomcar and head to the park which is 368 km or 6 hours away} 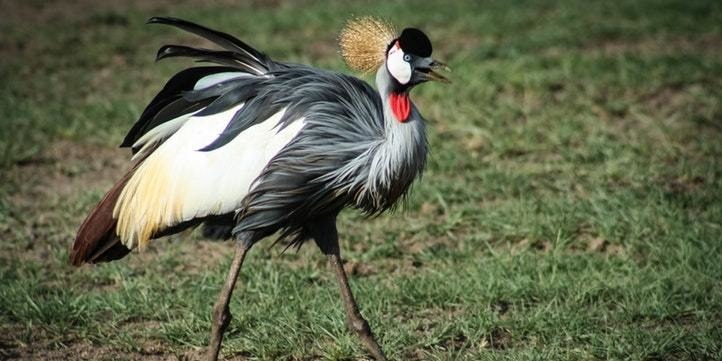 Formerly called the Bharatpur Bird Sanctuary, this 29 square km park in Eastern Rajasthan is a UNESCO World Heritage Site. Initially started as the hunting reserve for the maharaja of the state, this park today boasts of more than 360 bird species, making it one of the most beautiful spots for birding in the world. Some of the avian wonders that are in the park come from as distant lands as Siberia, Turkmenistan, China, and Afghanistan.

That’s not all – the park is also home to Sarus cranes, which are the tallest flying birds in the world and can grow up to six feet in height. In the morning, you can spot sambar, nilgai, and chital that usually congregate by the lakes during the early hours. Further, the wetlands are also inhabited by various reptiles like the Indian rock python, common wolf snake, monitor lizards, and turtles.

Depending on the water level, guests at the park can take a boat safari between November and February. The best time to visit this park is between October and April.

How to reach – The nearest airport is Agra, which is 54 km from Bharatpur. The nearest railway station is Bharatpur Junction, that is only 5 km from the national park. 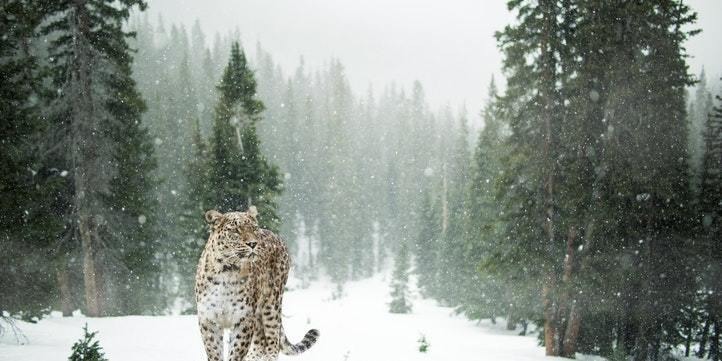 One of the largest national parks in India, the Hemis National Park is blessed with a distinct yet unique topography. It boasts of snowy peaks, barley fields, narrow gorges, rocky cliffs, and turquoise water bodies. A visit to this park is quite a hectic affair as it requires a lot of walking, camping, and frigid weather that goes down to -30˚C in winter.

Since the park is at a very high altitude, Hemis does not have wildlife and vegetation at every step. That being said, the park still boasts of an incredible number of animals like the Tibetan wolf, red fox, Eurasian brown bear, Ladakhurial {wild goat}, lammergeier vulture, and Himalayan griffon vulture.

The biggest draw of the park, however, is the snow leopards and spotting one in the wild is considered as the holy grail of wildlife spotting. There are only around 300 of these graceful animals that survive in the wild in India. In winter, these snow leopards descend to slightly lower altitudes, making it a bit easier to spot them from November to March. You can even sign up for treks around the Husing valley, Ganda La pass, and Khardung as these are excellent places to spot the snow leopard and other animals. It is highly recommended.

How to reach – The nearest airport is Leh, which is 50 km from Hemis National Park.

Best time to visit – May to September. 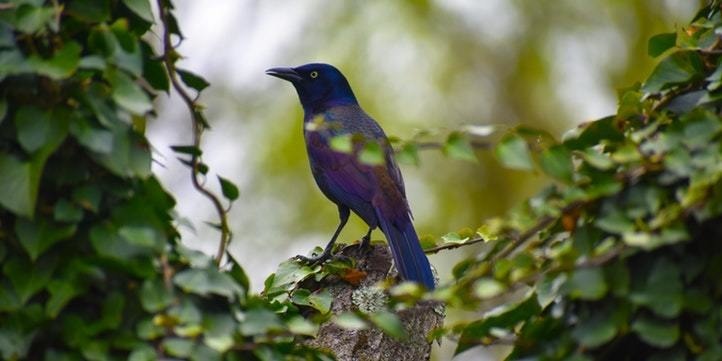 Located in the floodplains of the Brahmaputra River in Eastern Assam, the Dibru Saikhowa Park is home to almost 380 bird and 36 mammal species, many of which belong to the endangered category.

Apart from the feral horses, the Gangetic dolphin, and endangered birds like Jerdon’s babblers, black-breasted parrot bills and great pied hornbills are unusual animal species that you can see here.

The park is open throughout the year. During your stay, you can also go for a trek from Gujjan to Kolomi, which stretches for almost eight kilometres and takes you through meadows, forests, and streams. We also recommend a boat trip around Maguri Bheel, a wetland near the reserve, during the monsoon from May to October.

How to reach – The nearest airport is situated Mohanbari, Dibrugarh, which is 40 km away from the park. The other airport Guwahati is 500 km away. 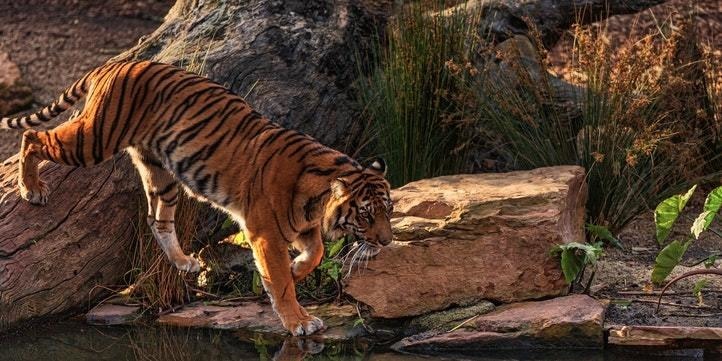 A designated UNESCO World Heritage Site, the Sundarbans mangrove forest is the largest in the world. Extending over 10,200 square kilometers, of which 4,200 square kilometers is in India and the rest is in Bangladesh. The only way to navigate the complex network of rivers and estuaries in the Sundarbans is through a boat. Many tour guides will help you discover the abundant mammal and marine life of the swamp. However, if you want to see the elusive Royal Bengal tiger, you’ll have to be perched on a watchtower deep inside in the jungle. If you have the time and patience for this, we highly recommend it, as it is an experience of a lifetime.

In the winter months, animals in the park can be seen enjoying the sun on the riverbank. This means that you can easily catch a glimpse of the fishing cat, leopard cat, rhesus macaque, wild boar, Indian grey mongoose, flying fox, pangolin, and chital. Winter is also a great time to spot the saltwater crocodile, the king crab, and monitor lizard. Further, the reserve also boasts of small pods that are home to Gangetic and Irrawady dolphins that often swim next to tourist boats. That’s not all – there are over 200 bird species that have been recorded here. This includes a large number of birds that can be seen during low tide, as fish get trapped in the mudflats and are easy pickings.

The best time to visit the Sundarbans is from November to February. However, avoid the months between May and October, as the areas receive heavy rainfall during this period, which results in flooding and oppressive humidity.

How to reach – It is located at an approximate distance of 112 km from Sundarbans. From here, you need to go Canning, Basanti, Gosaba or any of the launch terminals, where you have to hire a motorboat to reach Sundarbans area. The nearest railway station to Sundarbans National Park is Canning and Seadalh 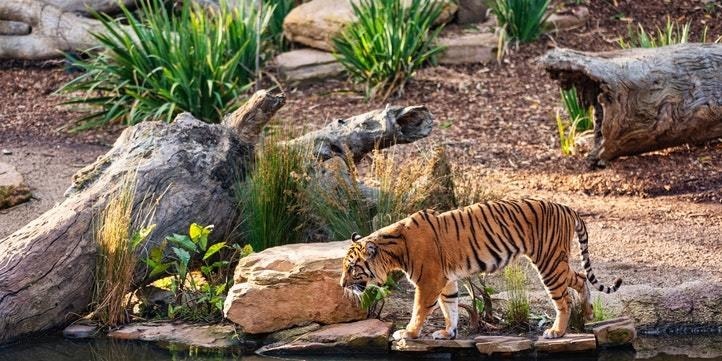 In 1998, the decreasing tiger population and rampant smuggling of cinnamon trees started to impact the park, which led to conservationists stepping in to take some much-needed steps. The men of the local communities were weaned away from poaching and trained to become forest guards and guides. Although many of them have never attended school, they are highly knowledgeable in the affairs of the forests like feeding patterns of the tiger butterfly, the ideal time and place to spot the grey-headed owl, and the frequented trail of the closest tiger.

Offering an immersive forest experience, the Periyar National Park in Kerala, allows visitors to walk, raft, and even camp in the forest. The most adventurous experience is the Tiger Trail, where visitors can sign up to camp in the woods for one or two nights. During this time, they can join the armed forest guards on their night watch. They also offer a three-hour late-night hike through the forest with a guide. A rare chance to experience the beauty of a forest at night; it is a unique and unforgettable experience.

This park is open throughout the year. November to March is excellent for cold weather and a bright green canopy. If you visit between April and October, you can avoid the crowds, although you might have up with some heat and humidity.

How to reach – The closest airport to the park is Kochi that is 200 km away or Madurai in Tamil Nadu, which is close to 140 km from Periyar. If you are planning to come by train, Periyar station is around 114 km from the park. You can also book a Zoomcar from anywhere in Kerala/Tamil Nadu as the roads here are pretty good. Make sure you carry your license if you are coming from out of the state.

Have you planned your trip yet?