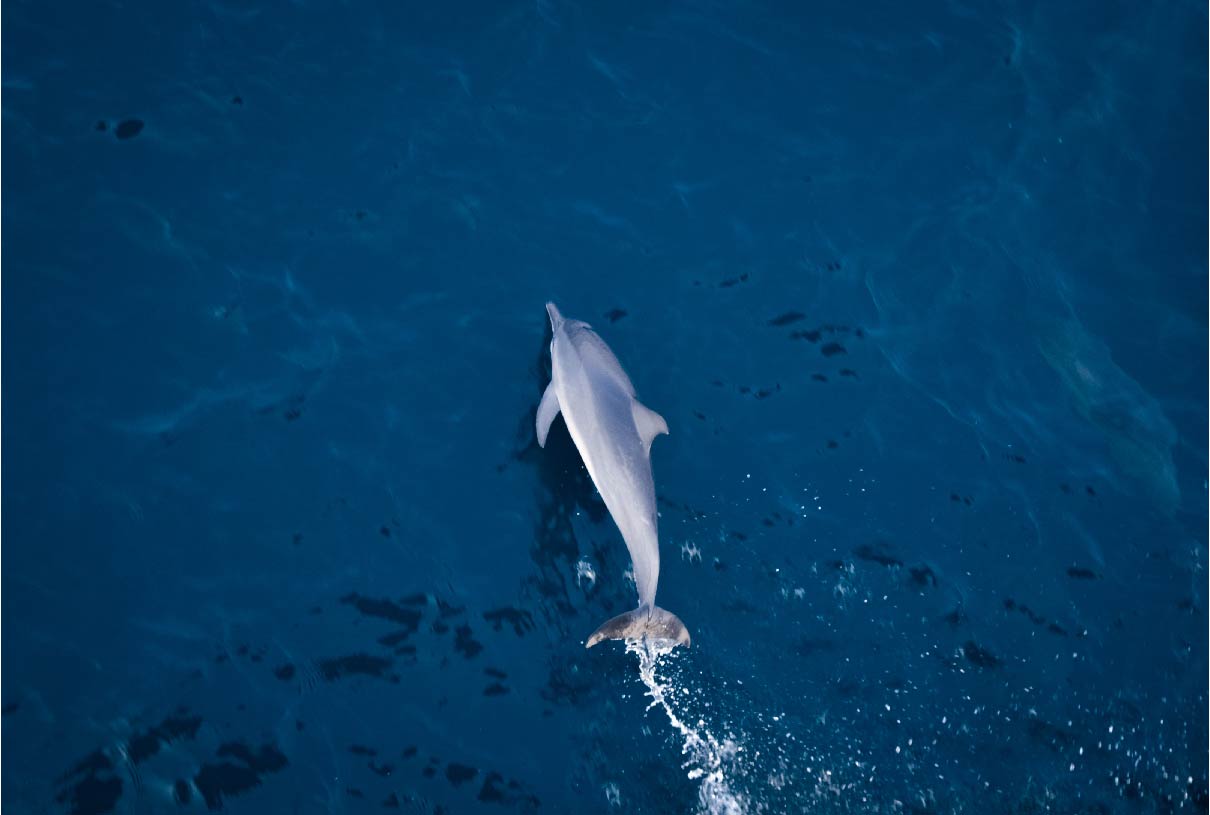 With a coastline stretching thousands of kilometres, and rivers and lakes forming a vast inland waterways network, India is home to some unique wildlife attractions. While most wildlife lovers will be aware of the multitude of tiger safaris in the country, lesser-known are the many spots where one can witness dolphins in India. These beautiful creatures can be spotted in several parts of the country, and there are more than one species of dolphins in India that calls these waters home. Below is a list of locations where you can see a dolphin show in India while also experiencing many other natural wonders. 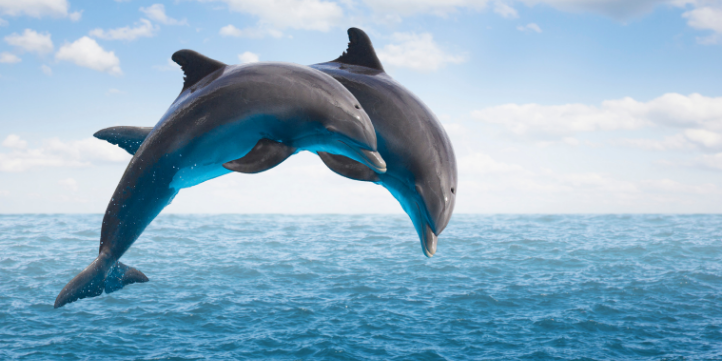 The Gangetic dolphin is India’s national aquatic animal, but unfortunately, it is classified as an endangered species. However, one of the best places to spot Gangetic dolphins in India is in Bihar, at the Vikramshila Gangetic Dolphin Sanctuary.

A 60-kilometre stretch of the river Ganga that has been marked out for conservation, this sanctuary is home to hundreds of the world’s few remaining Gangetic dolphins. There are also many reptiles, birds, and fish that are also part of this vibrant ecosystem. The best time to visit the Vikramshila Gangetic Dolphin Sanctuary is from October to June. 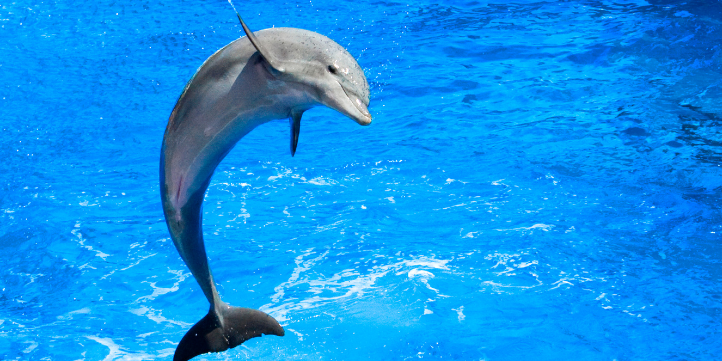 Chilika Lake in Odisha is a remarkable ecosystem, a sprawling wetland that surrounds the largest brackish water lagoon in the world. The partly estuarine nature of the water means that it is also habitable for sea-going dolphin species, and a population of rare Irrawaddy dolphins also calls the lake home. Satapada, on the shores of Chilika Lake, is one of the best places to witness Irrawaddy dolphins in India. The best time to visit this beautiful wetland is from November to February. 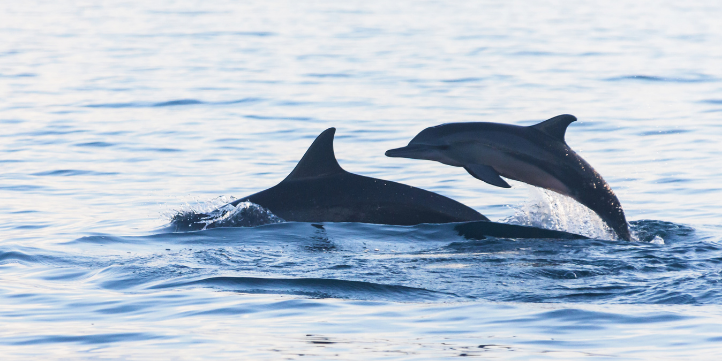 Apart from the freshwater species, there are many different species of oceanic dolphins in India as well. One of the best places to spot these dolphins, including species like spinner dolphins, bottlenose dolphins, and humpback dolphins, is the Gulf of Mannar Marine National Park in Tamil Nadu.

Visitors to this park can ride in glass-bottomed boats that offer stunning views of the seafloor and colourful coral reefs. The park comprises 21 small islands and their surrounding reefs and is open to visitors all year round. You could also get a chance to spot the endangered dugong at this marine park along with the dolphins. 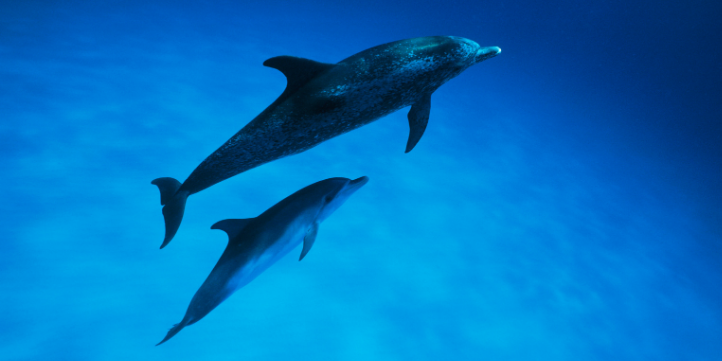 A lush, thriving ecosystem in the Indus river basin, Harike Wetland is an extraordinary place for India’s dolphins. It is the only location that the Indus River dolphin is found, after having been considered extinct in the country for decades until their rediscovery in 2007. A small population of these dolphins calls this wetland home, along with a collection of other aquatic life like otters and turtles.

The Harike Wetland also houses a bird sanctuary, making it an excellent destination for bird spotting. October to February is considered the best times to visit. 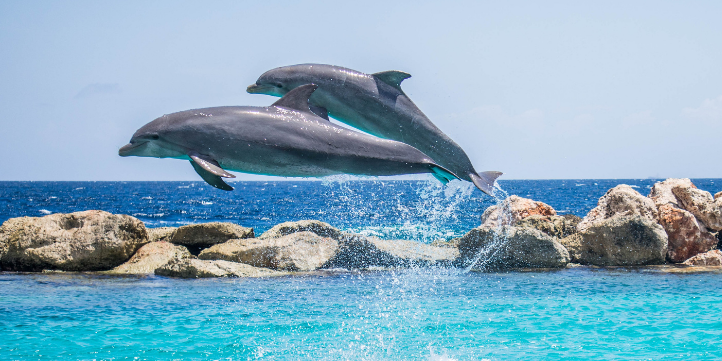 Spotting a dolphin in Goa  is an unforgettable experience shared by many people, as India’s most popular beach destination is well-known for its dolphin sightings. If you would also like to see a dolphin in Goa, then you can look forward to encountering some of the oceanic species, like humpback dolphins and bottlenose dolphins.

Many beaches in Goa are famous for dolphin spotting. Taking a cruise from Sinquerim Beach, Morjim Beach, or Cavelossim Beach, to name a few, is a great way to see a dolphin in Goa. There is no fixed time of year to visit, as the dolphin sightings occur all year round off the Goan coast. 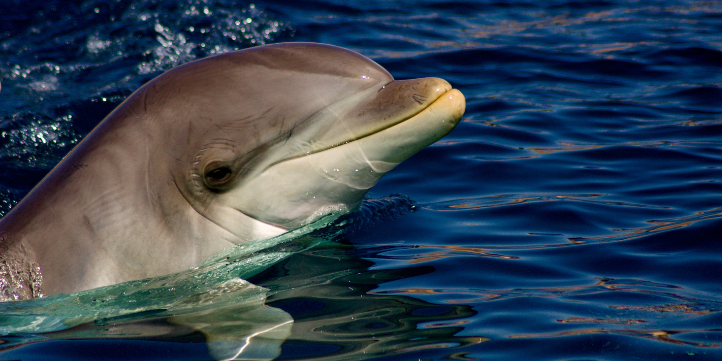 The Gangetic dolphin is a truly remarkable creature, and it exists along with some equally fascinating – and equally endangered – species in the National Chambal Gharial Wildlife Sanctuary in Uttar Pradesh. As the name suggests, this park on the Chambal River is home to the gharial, a critically endangered crocodilian family member.

Alongside the more enormous mugger crocodiles and other endangered reptiles like the red-crowned roof turtle, the Gangetic dolphin thrives in this park. The best time to visit this sanctuary is from October to March.

These nature reserves and marine parks are simply the best places for a dolphin show in India, offering a chance to witness some of the planet’s rarest, most endangered creatures  in their natural habitat. Having the opportunity to see dolphins in India is a gift, and if you would like to make the most of it, then digibank Travel Now  has attractive packages and offers to make that dream a reality. Seeing these beautiful aquatic animals in the wild will be a memory you cherish for life, so start making plans to see dolphins in India at the soonest.